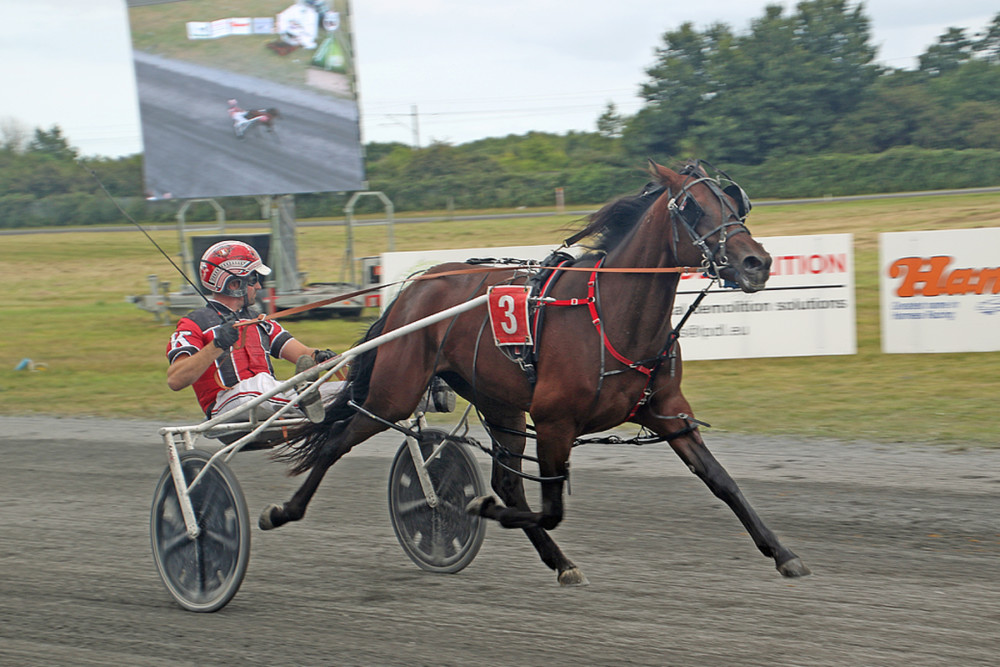 By Sportswriter, sire of Oakwood Starcam who landed the spoils in 2018 Rainbow Writer gave the owner/trainer Bernard “Benny Grendon” his greatest ever day in the sport when she pulled off one of the unlikeliest of victories in VDM history. From the 3 hole driver, Patrick Kane tried to leave hard but he couldn’t quite get enough clearance.  Forced wide into the first bend the filly suddenly made a bad break. Almost at a standstill at the tail of the field most drivers would have pulled her up and saved the filly for another day – but you only get one chance at a VDM final and Kane refused to take this set back lying down. Nursed back into contention Rainbow Writer had moved into fourth by the half and using her devastating turn of foot to the great effect she was in front by the ¾ pole and found herself six lengths clear turning for home. Maintaining that margin-right to the wire Rainbow Writer had executed one of the most extraordinary comebacks ever in Irish harness racing to the shock and delight of the packed grandstand. 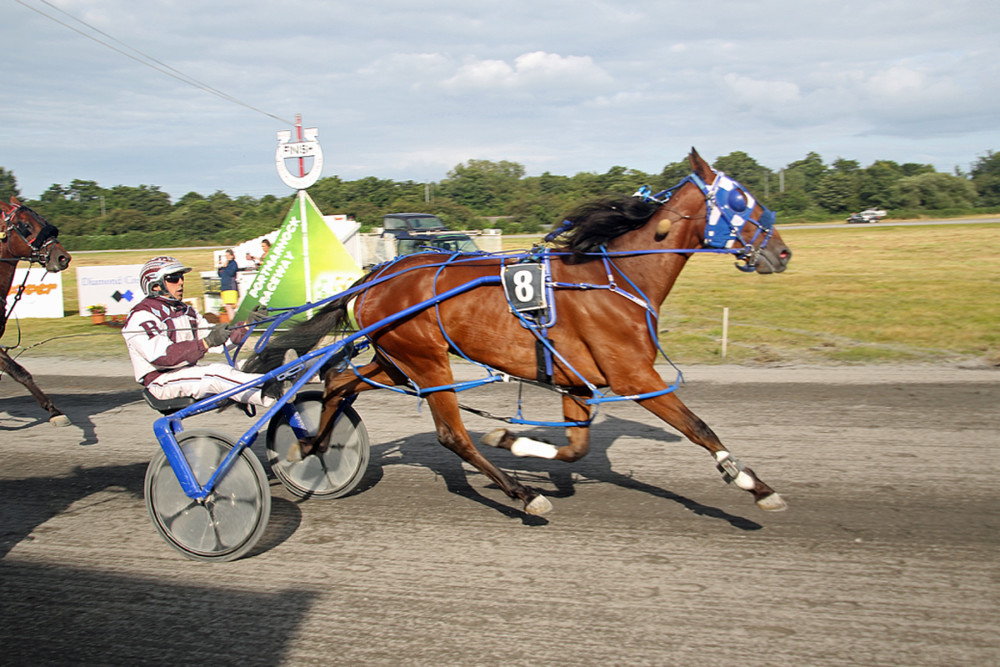 Following in the footsteps of half brothers Titanium, Miraculous, and Matticulous, the Armrbo Deuce bred Matteuceous became the fourth winner of the Colts VDM final out of dam Another Mattie in 2019. The top lot at the 2018 Builth sale costing £25,000 the Frank Hushka owned Alexis Laidler trained colt demonstrated his well-being before VDM weekend by taking out the Breeders Crown at Tir Prince a fortnight earlier. Drawn 8 in the VDM final driver William “Rocker” Laidler dropped Matteuceous to the tail of the field at the off before producing the colt with a sustained run from half-way. Four wide rounding the home turn he kicked on again in the stretch to ambush the Jordan Stratton driven Oakwood Cowboy close home to triumph in 2:03. A big future awaits the big son of the ill-fated Armbro Deuce who showed tremendous heart and courage to win going away, from what appeared to be an unlikely starting position 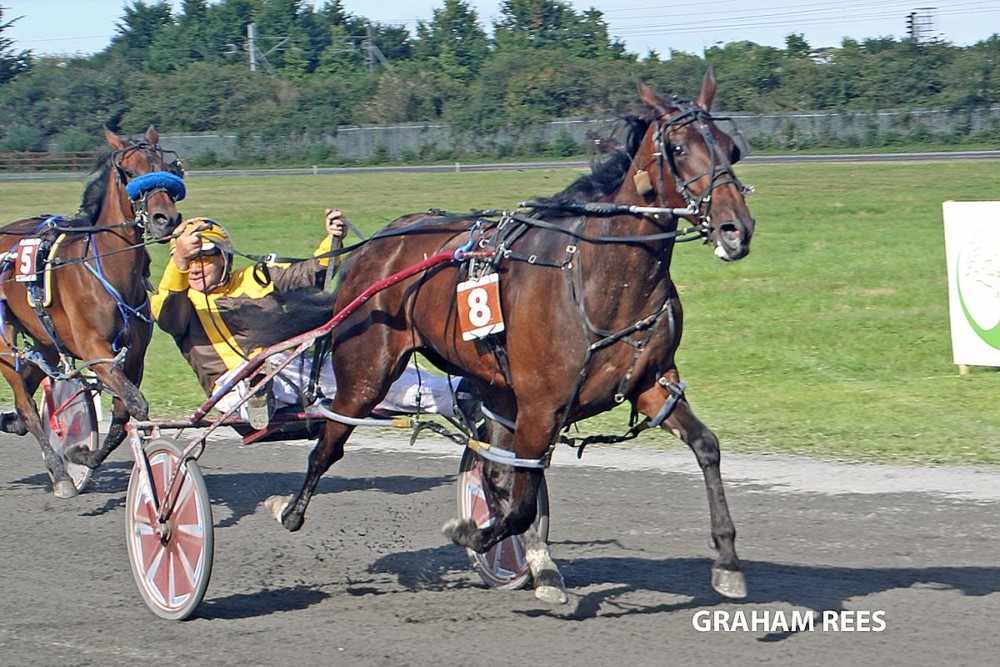 OAKWOOD STARCAM (Sportswriter – Camadian)
Time: P, 2, 2:02.7
Owner: Meadowbranch/Brian Redmond
Trainer: William Flanagan
Driver: John Richardson
Breeder: Oakwood Stud (IRL)
Oakwood Starcam was the highest priced yearling filly ever sold under auction when the hammer fell at Brightwells Standardbred Sales in October 2017 and the £28,000 given seems cheap considering she went unbeaten throughout 2018 culminating in an unlikely but deserved victory in the 2018 VDM. From an uncompromising draw 8 and trouble in running the filly dug deep into her reserves under John Richardson to snatch victory from the jaws of defeat for owners Meadowbranch/Brian Redmond who shared the winner’s enclosure with an emotional Delaney family who had finally bred an Oakwood suffixed winner of their late brother’s memorial event. The time of 2:02.7 was inconsequential given the manner of her victory. 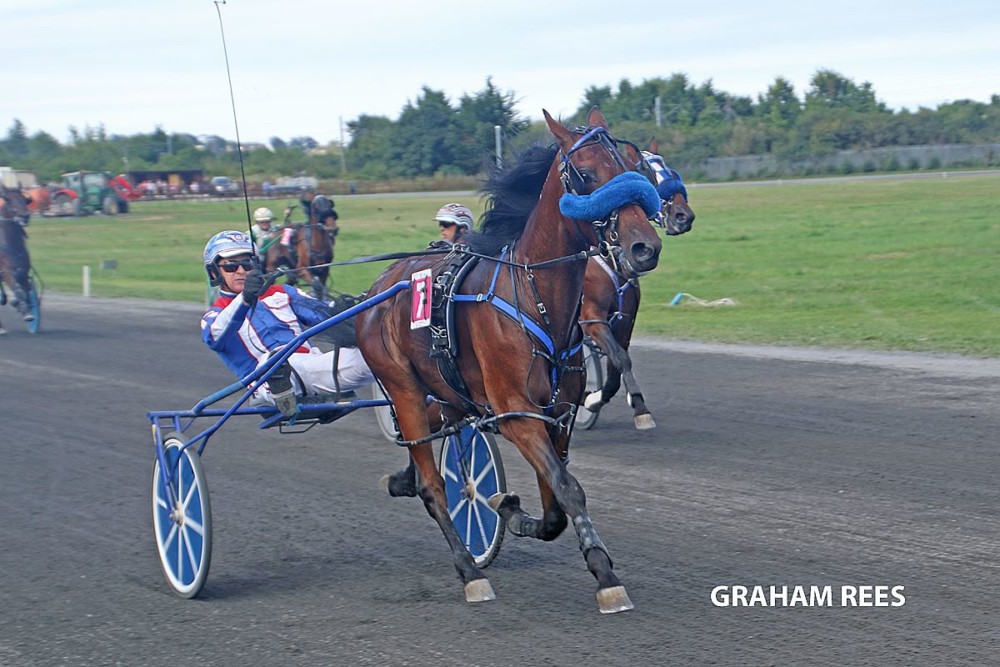 NORTHERN PRIDE (Bettors Delight – Artomatic Love)
TIME: P, 2, 2:03.4
Owner: Steven Gilvear
Trainer: John Gilvear
Driver: Gordon Gilvear
Breeder: Northfields Farm (CAN)
Northern Pride became the first ever Scottish winner of the VDM when he emerged triumphant from a difficult 7 draw with Gordon Gilvear in the bike. The colt by Bettors Delight was another Harrisburg purchase and owned by Gordon’s uncle Steven Gilvear from Auchenbowie and won a shade cosily in 2:03.4 to the delight of a big Scottish contingent who thronged the winners enclosure to celebrate with the entire Gilvear family. 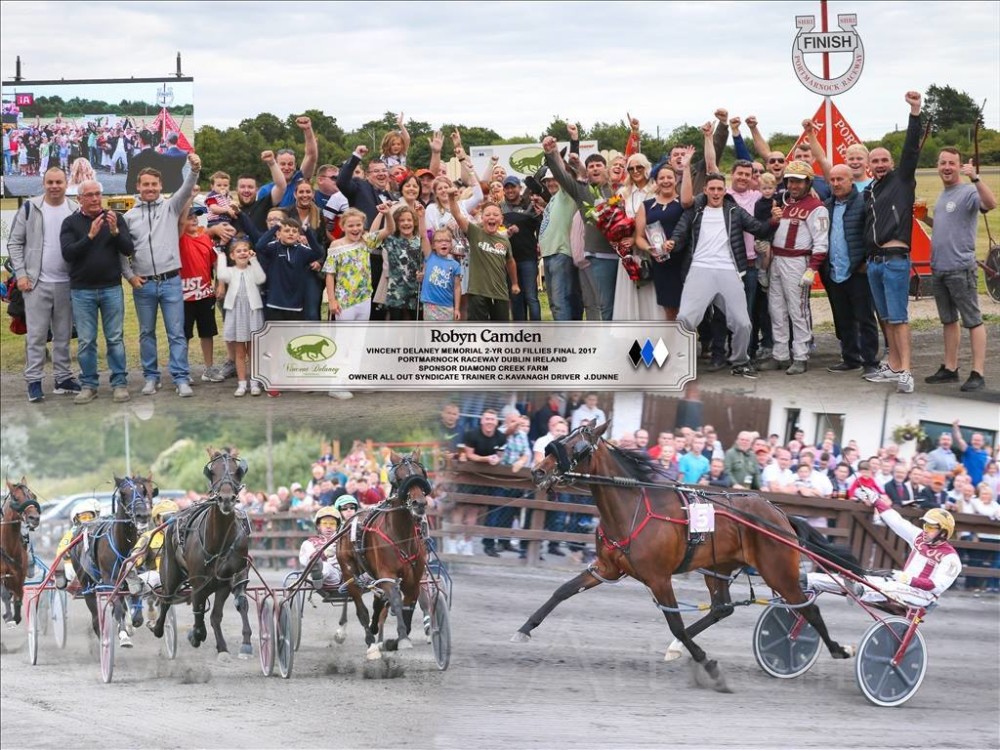 ROBYN CAMDEN (Art Professor – Keystone Havoc)
Time: P, 2, 1:59.8 **Track Record**
Owner: All Out Syndicate
Trainer: Clive Kavanagh
Driver: Jonathan Dunne
Breeder: Camden Stud (ENG)
In the weeks leading up to the event, Robyn Camden was hot favourite to triumph in 2017 and stunning dark bay didn’t disappoint. Bred by Camden Stud the filly was owned by All Out Syndicate, trained by Clive Kavanagh and driven to victory by Jonathan Dunne who kept things simple and just blitzed the competition from the outset in both the heat and the final. Pacing 1:59.6 NEW TRACK RECORD for Fillies in her heat on the Saturday, she came out on the Sunday and paced 1:59.8 to take the crown and the €10,000 first prize. Robyn remained unbeaten in 12 straight races and was eventually sent across the Atlantic to resume her career in the Autumn of 2018. 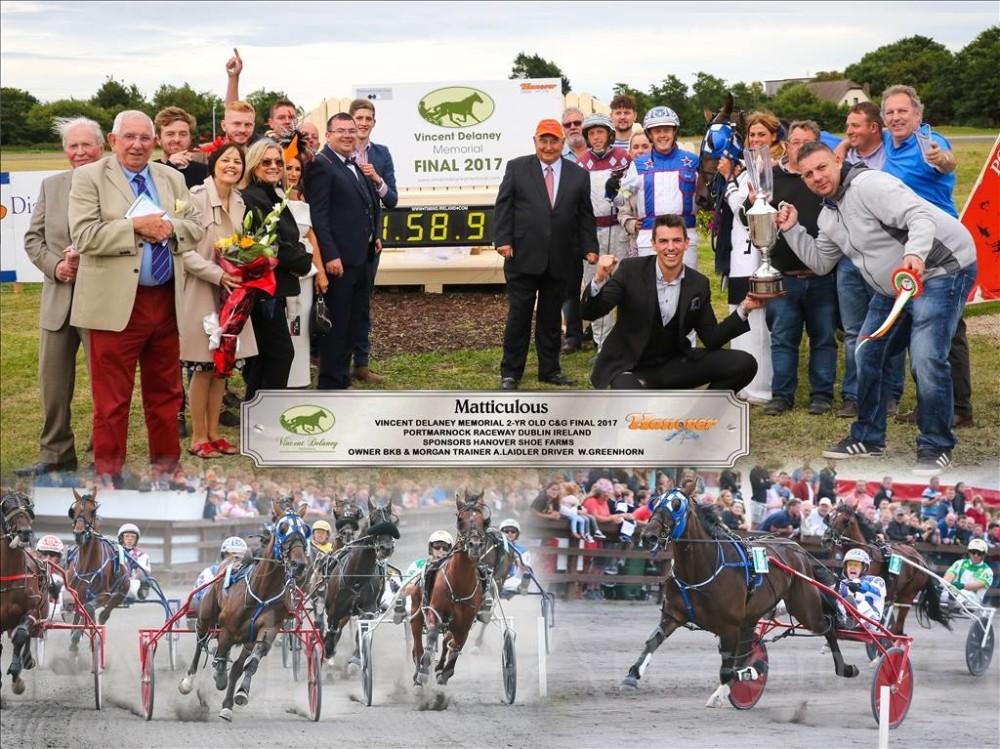 MATTICULOUS (Hasty Hall – Another Mattie)
Time: P, 2, 1:58.9 **Track Record**
Owner: BKB Morgans Syndicate
Trainer: Alexis Laidler
Driver: William Greenhorn
Breeder: Gareth Price (WALES)
An astonishing feat was achieved in 2017 when Matticulous strode to an imperious victory in the final of the colts VDM. His dam Another Mattie was responsible for Titanium in 2014 and Miraculous in 2015 making her the mother of 3 separate VDM final winners in just 5 years. A £32,000 yearling from Builth in October 2016, Matticulous cruised to a heat win in 2:01.4 before going on to smash the TRACK RECORD clocking 1:58.9 in that year’s grand final. Owned by a syndicate hailing from Wales and England the colt was driven by crack Scottish reins man for the UKs champion trainer Alexis Laidler. 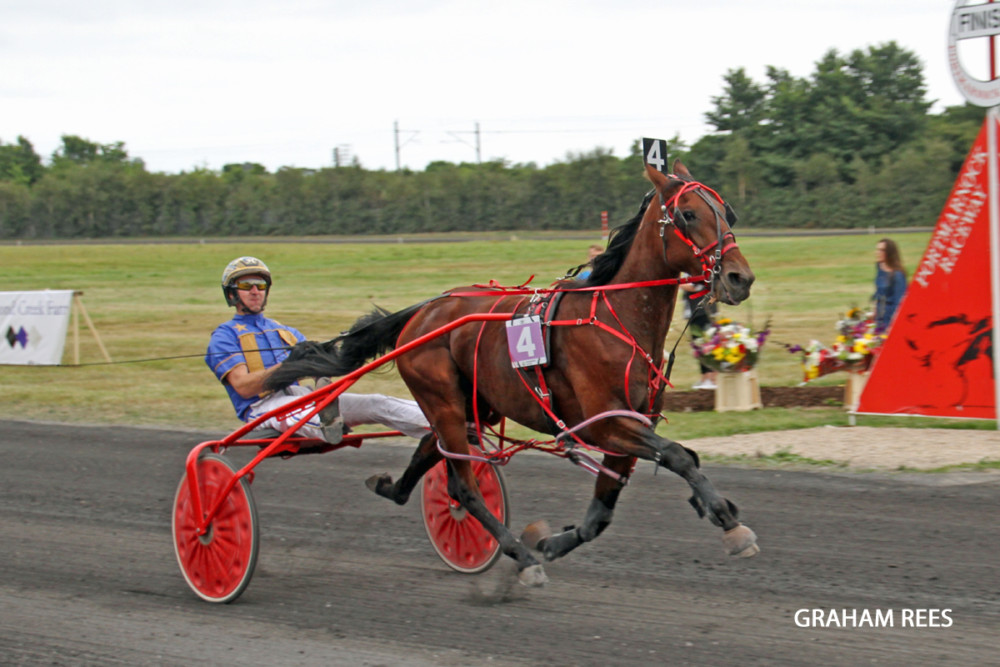 TYRION HANOVER (Somebeachsomewhere – Tiz To Dream)
Time: 2:01.6
Owner: John Howard
Trainer: Samboy Howard
Driver: Richard Haythornthwaite
Breeder: Hanover Shoe Farms (USA)
Such was the success of the VDM over the previous 4 years that organizers now decided to split the event into 2 separate divisions for colts and fillies. In 2016 Tyrion Hanover became the first ever US bred import to capture the prize. Acquired in Harrisburg the previous autumn by John Howard from Morecambe in the UK and trained by his son Samboy, Tyrion Hanover won his heat in 2:03.2 before going on to win that years final in 2:01.6 with Richard Haythornthwaite doing the steering. 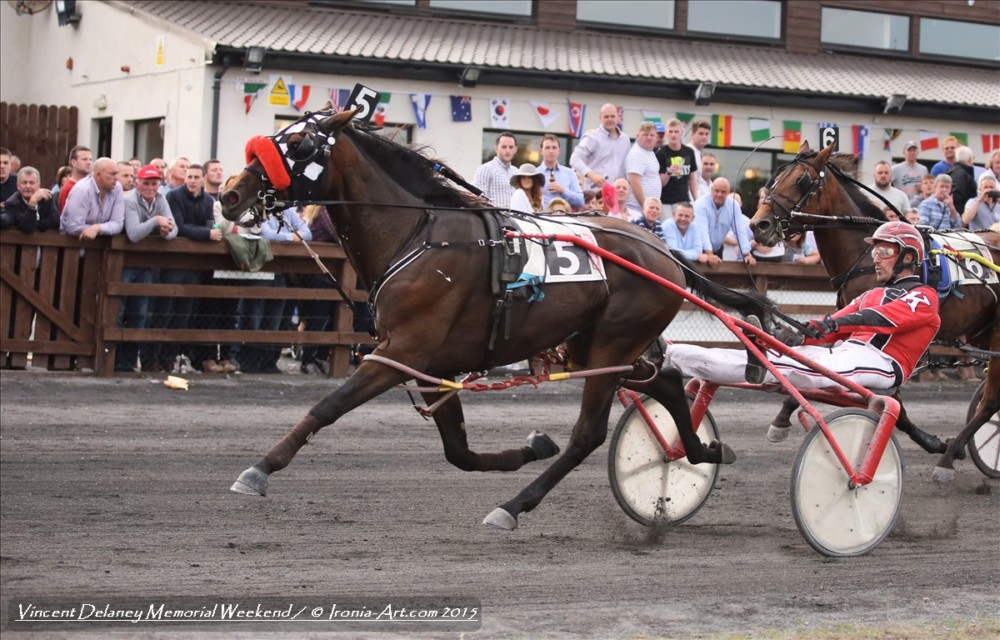 MIRACULOUS (Arts Conquest – Another Mattie)
Time: P, 2, 1:59.9 **Track Record**
Owner: Arnie Flower
Trainer: Sally Teeboon
Driver: Patrick Kane
Breeder: Gareth Price (WALES)
Miraculous became the first ever VDM winner to break the 2-minute barrier in the 2015 renewal. By Arts Conquest who was responsible for siring Frisco Fiddler in 2012 and out of Another Mattie who also the dam of 2014 winner Titanium, the colt was a heavily touted favorite beforehand and he didn’t disappoint winning his heat easy in 2:00.9 a NEW TRACK RECORD before going to clock 1:59.9 a NEW TRACK RECORD in the final. Owner Arnie Flower and trainer Sally Teeboon used top local driver Patrick Kane to guide Miraculous to victory a successful triumvirate that continues right to this day 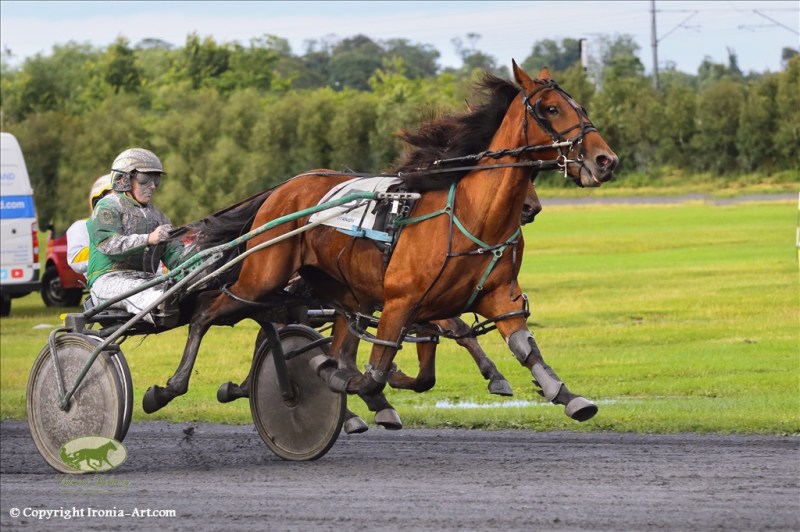 TITANIUM (Hasty Hall – Another Mattie)
Time: P, 2, 2:01.8 **Track Record**
Owner: Roy Sheedy & John Gill
Trainer: John Gill
Driver: Vicky Gill
Breeder: Gareth Price (WALES)
Father and daughter John & Vicky Gill came back to Ireland a second time in 2014 and the combo duly landed the spoils once again with the ill-fated Titanium. Bred by Gareth Price and sired by the mercurial Hasty Hall out of Another Mattie the colt won his heat in 2:01.18 a NEW TRACK RECORD and the €12,000 final in 2:01.8. The victory was all the sweeter as trainer John Gill was also part owner of the colt along with BHRC Chairman Roy Sheedy.